Network Closet
When I first purchased our new house, I wasn’t aware that a previous owner had updated various outlets in the house and run ethernet cable from the outlets to a closet.  We never looked too close at this closet to see that the cables were all running together.

Not too long after moving in, I had a professional come in, install some home theatre equipment and fix the network.  They fixed the patch panel connecting up the existing network cables.  They installed three new runs of cables from the kids’ room, living room, and family room to the closet.  They also relocated the Verizon ONT Ethernet cable from the office area to the network closet.

Broadband Internet
I work from home using the network pretty much all day.  At night the kids like to watch shows on Netflix or iTunes on the AppleTV.  Work and play at our house utilizes a lot of bandwidth.  After starting to work from home in the last house, I upgraded our Verizon Service from 35Mbps to 150Mbps.  This caused a lot of problems at the old house.

We had Verizon FiOS installed as soon as their systems registered it was available for the house, around mid-2007.  We therefore had an early ONT box (optical network terminal that converts the fiber into twisted-pair telephone, coax, and ethernet) and the box had to be upgraded to even handle the faster Internet speed.  The FiOS router had to be replaced as well since the switch on the router only supported 100Mbps and would be too slow for the broadband.  Newer FiOS routers have gigabit switches and so this was replaced.  Last, the WAN coax was swapped for ethernet cable.   The installer had a lot of trouble switching the ONT boxes and getting our account setup with the new one, including the phone, video, and network.  But once it was all setup, the 150 Mbps speed was great.  Generally, things download quickly.

When we moved, one of the considerations for new house was having Verizon FiOS available.  I just don’t think I could easily go back to the Time Warner cable.  Verizon hasn’t yet put in any soft bandwidth caps and I would certainly hit them every now and then.  I use Crashplan to back up all of our pictures, music and movies off site and a full backup of these pushes 1 TB when I first started and 1.4 TBs now.  The new house also has Verizon FiOS and the move process went relatively smooth getting the phone moved to the new line and the set tops / cablecard recognized for the new account.  There wasn’t a good place to install the battery backup, but eventually came up with an OK place to install as it had to be installed indoors out of weather.  It was eventually installed behind an access door to the power supply to the jet spa tub. We continue to have great 150Mbps download from Verizon.  It isn’t 1Gpbs that Google is offering in the few places they offer, but it is pretty rare to consider the service disappointing.  The only faster option Verizon has at the moment is 300Mpbs, but can’t justify the price on that yet.  The 150Mbps easily allows kids to watch their own Netflix Super HD streams while I still do other things on the computer. In three months, I don’t feel we have been restricted by our broadband.

Awesome Local Network
Having the great Internet bandwidth only works with local network not getting clogged by communication of different devices.  This is what makes the ethernet cabling so great.  I can more easily segment the traffic and not overburden the WiFi network.  For example, the home theatre has TiVo Roamio, Samsung Smart TV, and AppleTV that each can use ethernet or WiFi.  In addition, the receiver has ethernet for Internet radio, Airplay support or network remote functionality.   I have laptop I use most of the day, build server, media server and laptop for Carrie and Kids.  There are many more devices, such as Home Automation server, couple more AppleTVs, Time Machine backup server, another Airport Extreme and TiVo Mini.  There are the Samsung Smart Washer and Dryer with network access.  Finally, there are multiple tablets and phones.

If all these devices were trying to access a single WiFI network, especially during video streaming, it would suck, even though I have dual band wireless-N routers available.  By moving most stationary devices to ethernet I lighten the load on the WiFi-only devices and they can make better use of the network as well.

Having the switch in the network closet only makes this better.  Devices that need to communicate can generally do it with less interference from other devices.  For example, we have TiVo Mini that pairs with the TiVo Roamio.  The Mini uses one of tuners on the Roamio to watch live TV.  The Mini can change channels by which the Roamio will use a tuner to decode the cable data and then stream the video the Mini which presents on screen.  The Roamio sends the network data to the switch which then sends it to the Mini all across ethernet, not affecting WiFi usage.  Further, the switch will move the data from the Roamio to the Mini without impacting other devices on other ports.  My laptop can browse the Internet which will send data to the switch which is then sent to the uplink to the router, not interfering with the Roamio/Mini data stream.   The switch on the Router isn’t used and all traffic on the uplink cable is only data that is going to or coming from the Internet.   The Roamio to Mini don’t necessarily have full use of the line, however; there is a second switch with the home theatre equipment.  The TiVo, AppleTV, TV, Receiver, and an Airport Extreme are plugged in to a switch with the uplink going go the switch in the network closet.  With the second switch also a gigabit switch, the devices aren’t going to create too much interference with the other devices.    There is a third switch in the office that has 3 computers, the Time Machine, and the home automation server.

The 1Gbps LAN is great and fast.  I copied a 2GB file from old laptop to new one.  I was able to get to a near sustained transfer rate of 117 MBps or 936 Mbps.  That’s pretty awesome network performance.

With the ethernet and switch, I am able to have two (currently) WiFi access points connected at different points in the house.  With simultaneous dual band 80211.N the remaining devices on the network are never too far from an access point.  The tablets work almost as good as the other devices for streaming video. 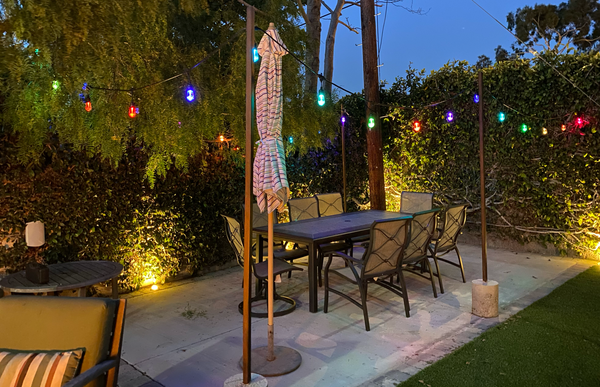 When I added cafe lights to define space in the backyard, I added automation control to programmatically turn them on and off.

As I integrated the XMPPFramework it requires the libidn library for a couple of methods it uses.  The latest version of libidn that the XMPPFramework included as of this writing is 1.15. Unfortunately, this version seems incompatible with the “Other Linker Flag&